Elvis Costello at the Warfield 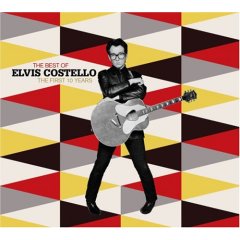 I managed to see Elvis Costello at the Warfield in San Francisco Thursday, picking up a reserved lower balcony ticket for a reasonable price on Craigslist.org.  My wife was out of town and I think she's had her fil of EC shows over the years, so this was a last minute decision.  Elvis is touring with the Imposters (2/3's of the original Attractions) in support of Universal's reissue of his back catalog, a new box set and two new compilations.  Upcoming gigs include Baltimore, Boston, New York, DC, Philly in May and dates in Europe in July including London, Athens, Madrid, Netherlands, Norway and Sweden.

The Warfield is a great venue; every seat has a good view, though the sound was a bit trebly for my taste, but it had energy to spare.  Costello and the band played for just over two hours with a short break in the middle.  The set list included a lot of old numbers ("welcome to the Working Week," "Big Tears," Beyond Belief," "Clubland," "The Beat", "Radio, Radio") as well as some more recent songs ("Country Darkness," "Alibi", "Dissolve" and "The River in Reverse").  The only disappointment to me was the reworking of a couple of classics including "Alison" and "(I Don't Want to Go To) Chelsea".  Maybe Elvis is sick of having people sing along and so he figured if he messed up the melody no one would try.  Elvis, it's a classic, just play it as is or don't play it at all.

While I would not say this was as good as last year's tour with Allen Toussaint, it was still great to see Elvis in good form and rocking at the age of 52.  I hope the Police tour is as good.  (Not that I have tickets.)