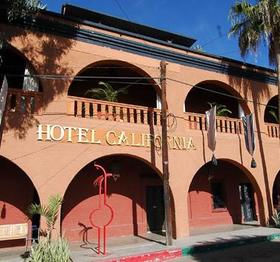 On a dark desert highway, cool wind in my hair
Warm smell of colitas, rising up in the air
Up ahead in the distance, I saw a shimmering light
My head grew heavy and my sight grew dim
I had to stop for the night...

Since the late 1980's there have been a long running rumor that the Eagle's song Hotel California was penned at a hotel of the same name down the coast in the small town of Todos Santos in Baja Mexico.  Other than the fact that Eagles front man Don Henley has unequivocally denied it, it makes for a good story.  The cover photo from the album is actually of the Beverly Hills Hotel, though there have been plenty of rumors about the album cover and the song's meaning.

My wife kidnapped me to Mexico for a long weekend and we ended up visiting Todos Santos, which has bcome a modest artist community located about an hour north of Cabo San Lucas.  We were there for an arts festival that included poetry readings, some traditional cultural dances and hot cuban jazz.

We did enjoy dinner at the Hotel California.  The food was high quality, the beer was cold and they have their own house brand of tequilla.  What's not to like? 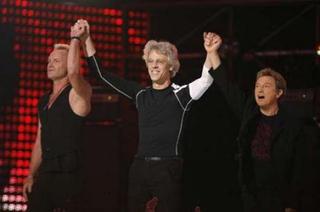 Following Sunday's Grammy reunion performance, The Police announced their plans for a 30th anniversary North American reunion tour this summer.  The show starts in Vancouver May 28th and will continue through 14 dates in the US and Canada.  Another 10 US dates are expected to be announced at a later time, as well as international dates in Europe and Latin America.

More info is available at the official www.thepolicetour.com site.

Update:
Cities on the tour are listed below.  (And if anyone has any extra tickets for June 13, Oakland, please let me know. It's my birthday!)

Fender has finally gotten into the modelling game. No, they won't be strutting down runways in Milan, but they are offering a new high-end american made stratocaster that includes a variety of modelled guitar sounds.  The Fender VG Stratocaster is clearly a response to Line 6's innovative Variax line of modelling guitars.  While Fender is late to the party, it has introduced a couple of interesting features.

First of all, the good news.  The VG Strat is a high-quality made in USA Stratocaster, and likely a step up in quality from the top of the line Variax 700 series in fit and finish.  Additionally, the VG Strat looks and acts exactly as a conventional strat.  It just happens to have two additional nobs for changing the Tuning and Mode. Fender makes a rather pointed statement in their demos that there's no 13 pin cable, USB cable or external power supply required.  It basically adds a Roland GK pickup at the bridge which supplies all of the modelling capabilities,  You can use the Mode nob marked "M" to switch between a Telecaster, a humbucker, a 12 string guitar, an acoustic etc.  Use the Tuning nob marked with "T" to instantly change to one of 5 alternate tunings like Drop D, Open G, etc.  With these two nobs you can switch between playing a strat solo to a Keith Richards riff or an acoustic sound.

Now for the bad news.  The VG strat is not cheap.  The list price is $2400, for which you could buy several Strats or Variaxes and still come out ahead.  This puts the price out of the league of most non-professional guitar players and all but a few stock brokers.  Another serious shortcoming is that you can have any sound you want as long as its a Fender!  While the VG strat include a humbucker sound, don't expect Fender to start bragging about how they modelled a classic Gibson Les Paul, SG, Gretsch or Rickenbacker.  Although it's still early in the testing stages, it does appear that Line 6 has the edge not only in breadth of modelled sounds but also in the quality of those sounds.  We will have to see how good the Fender VG stands up in reviews in the coming months.  A final issue, which is the flip side of not requiring a custom cable or power supply, is that the VG Strat will chew up batteries pretty quickly, with an estimated 8-10 hours playing time.

Lets see how Line 6 responds.  They have been at this game a long time and I'm sure they've been waiting for the day when Fender or Gibson would get into the modelling guitar business.  My bet is that Fender's entry is actually good news for them.  My guess is it will increase awareness for this type of product, since Line 6 can instantly piggyback on all of Fender's PR.  And Line 6's price is a heckuva good deal.  But lets see if they can keep innovating.

Here's my wish list for Line 6:  How about a 24" Gibson scale guitar with both traditional pickups and the famous Line 6 modelling capabilities.  Add the ability to change tunings with a switch and package it in a nice quilt top finish weighing under 7 pounds.  Give me the ability to use either a standard cable to a standard amp or a special cable and connector that takes advantage of the greater capabilities of the Variax.  Make it a two-way communications between my guitar and a GuitarPod, Line 6 amp or a computer hooked up via GuitarPort.   They've got some smart guys there and I'm sure they're working on it.

Update:
And here's a more serious business analysis of Line 6's disruptive strategy and Fender's response from the site www.ondisruption.com 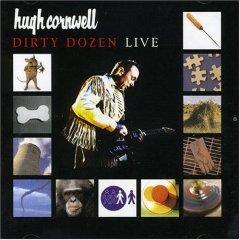 Cornwell will be touring Germany in March.  Hopefully we'll see some other dates across Europe and perhaps the US later in the year. 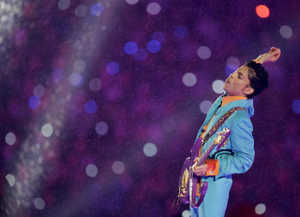 In the grand NFL tradition, Prince performed an excellent high-voltage medley at the SuperBowl half-time show in Miami this past weekend. Despite the rain and what must have been challenging acoustics, Prince put on what was one of the more memorable half-time shows in many years, arguably up there with U2 and the Rolling Stones.

In a tight 15 minute medley, Prince rocked through classics "Let's Go Crazy," covers of "Proud Mary," "All Along the Watchtower" (channeling Hendrix more than Dylan), Foo Fighters' "Best of You" and finishing with his all-weather hit "Purple Rain."  He played three different guitars, starting with what appeared to be a Telecaster, switching to a hot-rodded Strat for All Along the Watchtower and then his signature purple symbol Schecter guitar for Purple Rain.

With 70,000 attendees at Dolphin Stadium in Miami and an estimated 140 million TV viewers, this is great visibility for an artist who has been out of the limelight but still commands a huge following.  In fact, since releasing his comeback album Musicology in 2004, Prince has been on something of a tear.  His most recent album 3121 is up for five Grammy awards.  Prince is currently playing a weekend residency at the 3121 Club at the Rio Hotel in Las Vegas.

For a more humorous perspective, check out Dave Barry 's reaction to Prince at the SuperBowl from the links below. 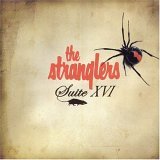 Long-lost 80's new wavers The Stranglers have released their 16th album Suite XVI.  The Stranglers remain one of my favorite bands from that era.  While the band is now in it's third major incarnation, the newest album is a nice follow up to 2004's Norfolk Coast.  Now as a four piece band, there's an even more tight focused and a return to the basic, rawer sound of the early days.  Many if the songs fit into the spirit of early hits like "No More Heroes" or

The Stranglers have tour dates lined up for Europe in March and April and hopefully they'll make it over the US one of these days.