In Toronto for a few days, I happened to spy some nice looking Michael Kelly Valor guitars over at LA Music on Lakeshore Road East.  Michael Kelly is a smaller west coast guitar manufacturer bought out by Hanser Music Group who also owns the OLP, BC Rich and Floyd Rose brands.  Michael Kelly's "Built on sound" tagline puts the emphasis rightly where it belongs: on tone and playability coming from years of manufacturing experience in mandolins and acoustic guitars.

While Michael Kelly's electric guitars have not skimped on sound, the first thing that struck me about these guitars was the elegance of the natural flametop maple finish.  The Valor is a classic double cut-away guitar, but more in line with a Paul Reed Smith than your typical Stratocaster clone.   The body is mahogany with a set neck and an easy to play 24 3/4" scale.  It's equipped with "Zebra" double humbuckers with push/pull coil split so that you get a range of sounds from chunky metal to a spanky clean lead when you really need to be in Strat territory.  The other impressive thing about these guitars is they weigh only 7 1/2 pounds.  Not quite a light as a Parker, but a whole lot less than a typical Les Paul.

LA Music has the remaining stock of last year's made-in-Korea Valor Q's for the low low price of $349 CDN, which is a tremendous deal. 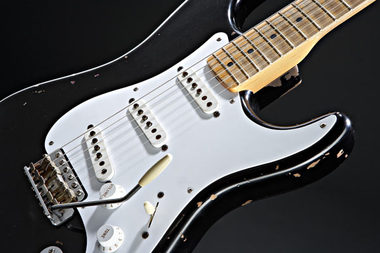 Two years ago, Guitar Center bought Eric Clapton's famous "Blackie" Fender Stratocaster guitar for a record $959,500 with the proceeds going to Clapton's Crossroads drug addiction treatment center.  Blackie was Clapton's main guitar for more than 15 years and used to record many of his most famous songs.  The guitar was featured on the cover of Clapton's classic albums Slowhand, Just One Night and Time Pieces, and has been coveted by guitar geeks for decades.

While Fender has previously issued signature Eric Clapton models that had many of the characteristics of Blackie, they have now upped the ante with a guitar that is an exact replica --including the weathered body, worn paint job, various dings and scratches, rust and headstock cigarette burns.  All of the parts have been aged to match the exact characteristics of the original guitar in an attempt to match the sonic style and playability of Clapton's original.

While I suspect that most of these guitars will be bought by collectors and locked away rather than played, there is something weird about having a new guitar that has been distressed to look like an old one.  Fender is making 275 of these puppies available in time for Christmas with 185 through Guitar Center and the rest presumably destined for Japan and Europe.  The price?  A whopping 24 grand.  No problem for New York stock traders or record company execs who can expense it.  Otherwise, it's probably better to buy an off-the-shelf Eric Clapton Signature Stratocaster, a big bag of cocaine and add your own cigarette burns.