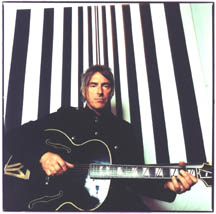 Paul Weller, driving force behind late 70's mod revival band The Jam and later the 80's cafe R&B band Style Council, continues to be one of the most revered and influential musicians in modern rock.  Though Weller never achieved the same kind of fame in the US as he has in Europe, he continues to have a hardcore following as "the modfather".  In the past year, Weller has released two albums, including the studio CD "As Is Now" and a live double CD "Catch Flame!"

While I would not necessarily put "As Is Now" on par with the classic Weller albums "Stanley Road," or "Wild Wood," there is still a lot of energy, especially with songs like "From the Floorboards Up" and "Come On / Let's Go".   "Catch Flame" is a stunning live album that captures the spirit, edge and innovation that has spanned Weller's career.  It's from a live concert recorded in London in 2005 and includes songs from his most recent albums as well as a couple of numbers from The Jam and Style Council days, balancing the spectrum of 30 years of music.