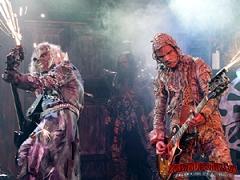 I happened to be in Finland on business the past few days, which was also the finals of the famous Eurovision song contest.  Finland has a rich history in this regard; having lost for 50 years.  In fact, most years, Finland has never received any winning votes.

Now, the shock in Europe is that Finland's heavy metal monster bad, Lordi, has won the contest with their new song "Hard Rock Hallelujah" beating out Russia's Dima Bilan's more romantic "Never Let You Go" by a wide margin.  In fact, "Hard Rock Hallejulah" won with more votes than has happened in the history of the contest.   Forget past Eurovision winners like Abba and Celine Dion, this was a metal fest par excellence!

From what I can tell with the local radio scene, most Finns seem to prefer the more traditional middle of the road crooners and Finnish folk music to the hard rocking sounds of Lordi, so this may be a pyrhic victory.  If Finland can't win with it's traditional approach, then they'll just scorch the earth with something so weird everyone will hate it.  And in so doing, everyone will vote for Lordi.

That being said, Lordi's music is not as bad as it looks.  It's fairly melodious, borrowing more from KISS and 1980's hair bands like Twisted Sister than from today's tuneless death / rap/ speed metal.  Still, you wouldn't want to run into these guys on a darkened street in Helsinki looking for herring.

I remember listening to The Vibrators first album Pure Mania back in 1977 when my friend Patrick picked it up from one of his family visits to England. The Vibrators were pub-rock retreads, but they knew how to write catchy melodies with a lot of energy.  Although they were one of the first punk bands, playing opening gigs with the Sex Pistols and the Stranglers, they were quickly overshadowed by the other bands that followed in the ensuing "new wave" of punk rock on both sides of the atlantic.  They did a few other songs, but they quickly fell into obscurity.

So I was surpised recently to see that the Vibrators have continued to record and tour for 29 years.  In fact, they've kicked off a tour through Canada during the month of May.  If you get a chance, check 'em out.