Live performances include Blondie, Herbie Hancock, Metallica, Robbie Robertson & Elvis Costello who seems to show up at every awards show these days.  (Not that I'm complaining, I'm a big fan.)

This was a vindication not only for the Sex Pistols, but also for Lynyrd Skynrd and Black Sabath who have been ignored for years by the middle-of-the-road hall of fame voters. 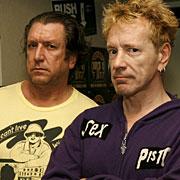 Unfortunately, after years of slamming the Hall of Fame, the Sex Pistols refused to pay the $2000 per plate fees to attend the awards dinner.  John Lydon posted a scathing critique of the Hall of Fame on the web site The Filth and the Fury.

While I can understand their reason for not attending, it is still a huge loss for Pistols fans to see them live.  I hope that they will pick up the mantle once more for a a few shows commemorating 30 years of primal rock and roll, but based on an interview on Pistols guitar player Steve Jone's Indie 103 radio show Jonesy's Jukebox, things don't look good.