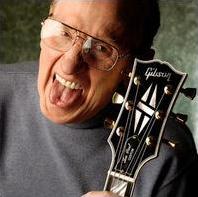 While Les Paul is perhaps more well known as a guitar than as a player these days, it hasn't stopped him from recording a new CD last year, and playing weekly in New York city at the Iridium Jazz Club where he's jammed with the likes of Keith Richards, Billy Gibbons, Paul McCartney, Slash, Dickie Betts, Steve Miller and Zakk Wylde .

Paul was hospitalized earlier this week as fluid accumulated in his lungs.