Line 6, the digital gurus of modelling guitars and amplifiers, have announced a new mid-range priced guitar, the long rumored Variax 600.  This new model has the Fender style six-on-a-side headstock of the Variax 300, but with a single piece maple neck and fretboard.  It also features a custom L.R. Baggs tremolo unit and a contoured basswood body.  My guess is this model will replace the Variax 500, whose price and availability was in freefall for the last few months as dealers got ready for this newer model.  The 500 is still a good product though and if you can find it, it's probably worth buying.  But the 500 just didn't get the volume needed to justify the price difference over the 300.   List price is $1199, so I would expect a street price of around $900 - $1,000, which is a pretty hefty increase over the Variax 300, but still a good deal cheaper than the Variax 700 which runs around $1400 - $1500.

Specifications available online at the Line 6 web site.  Also plenty of discussions to be had on the Line 6 forums.  If someone gets a chance to check it out at NAMM, please drop me a line and let me know how it plays compared to the existing models.

Ok, the usual signature guitars have been announced at Summar NAMM in rockin' Indianapolis. Although I was expecting a new John Melloncamp guitar, it seems instead that the new guitars are a John Mayer signature strat for a list price of $1,400, and a Brian Setzer (ex-Straycats) signature Gretcsch hollow body guitar for a mere $4,500 list price.

I wouldn't expect most guitar heros to be regular readers of Business 2.0, a leading business and technology magazine, but this month may be an exception.  There's a an interesting behind-the-scenes article on Guitar Center in the current July issue.  The article describes how GC's sales force and even the management team is largely composed of guitar players who quickly learn how to sell or don't make the cut.  While many are critical of Guitar Center's "big box" retail approach, it appears to be working well both for customers and for shareholders.
GC's revenues and share price have grown tremendously over the years with their rapid expansion to the point where they now represent approximately 20% of the overall market in the US.  I have no doubt that the accessability of the stores and their hands on approach has helped many new guitarists be able to afford their first (or second, or third) guitar.   The article also talks about some of the techniques sales people use and how you can get the best deal possible when shopping at GC. 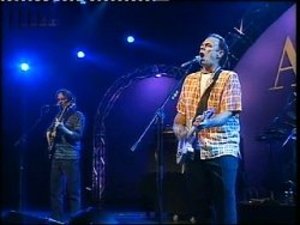 John Hiatt and his allstar band played the San Jose summer concert series with a huge crowd on this warm San Jose evening.  Hiatt was fit and trim as he led the band through a two hour set of classics and new songs of his latest CD "Master of Disaster."   Hiatt is probably best known for creating tuneful songs that are both poignant and clever, such as "Cry Love", "Memphis in the Meantime" and "Perfectly Good Guitar."  He's played for over thirty years as a singer/songwriter penning hits for major country & western acts and also fronted his own band and had a series of successful solo CDs.

For his most recent tour, John teamed up with the North Mississippi All-Stars featuring brothers Cody and Luther Dickinson on drums and electric guitar respectively and big man Chris Chew on a Fender electric bass.  Luther Dickinson added tremendous depth to the sound alternating between a Fender Stratocaster and a Gibson Les Paul for some excellent slide guitar work giving the band a real memphis feel.   This worked great on songs like "Ain't Never Goin' Back" and "The Tiki Bar is Open".   Hiatt was clearly enjoying the energy of the band as he shuffled across the stage and amused the aging boomer audience with his between song patter.  ("Is there a corn dog or funnel cake around here somewhere?")

Hiatt is continuing to tour throughout July and the early part of August.  If you get the chance, check it out at www.johnhiatt.com

Every now and then, there's an idea that comes around in new computer-related guitar technology and you think, "man, why didn't I think of that?".  The latest incarnation of the Fretlight Optek guitar may be one such match of technology to computers that could help thousands of wanna-be guitar players get started or improve their chops.  This isn't their first effort at it (you can occasionally find the older Fretlight 200 models on eBay) but it does have the most promise.

What Optek has done is put a series of very small LED lights directly into the fretboard of the guitar, recessed beneath some weird custom very playable polymer surface.  Then by virtue of the built-in DIN connector, you plug in the Fretlight directly to your computer with a standard USB interface.  Now your computer, or more accurately, software that on your Windows PC can control the guitar's LEDs to help you learn chords, scales, riffs or pretty much any song that has been tabbed.  It's this last part, the idea that any song can be demonstrated on the Fretlight that I think gives it so much appeal.  Yes, Optek has put together some nice MIDI based tracks that you can learn and play along to, but the selection is still limited and if your tastes are particular (and what guitarists tastes aren't?) then you'll want to play your favorite songs, not someone else's top 100 songbook.  And when you're done working with the basic included software, there are several add-on titles that are "Fretlight Ready" and quite serviceable.

So to get the benefit of the Fretlight, you need to be tethered to your PC.  However, when you're not plugged into the PC, the Fretlight is just like any other bog standard Strat-clone.  The configuration is two single coil pickups with a humbucker in the bridge position for a bit more versatility.  In the coming months, Optek will be adding a few more colors and hopefully some other styles of guitars.

Although Optek is still a small operation, the guitars are geting quite a bit of PR lately in magazines ranging from PC Magazine to BusinessWeek as well as a slew of UK guitar publications through their UK distributor www.emittor.co.uk.   (They must have made a field trip out to Bath and met all the editors at once!)  Look for a more in depth review in the coming months.  In the mean time, check out this PDF from the July issue of Total Guitar (UK). 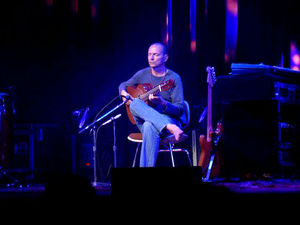 Ottmar Liebert, talented flamenco guitarist, and his Luna Negra band played a fine summer concert at the Mountain Winery in Saratoga. The four piece band, clad in oh-so-serious black, did a wonderful job recreating some of the soothing melodies and complex rhythms and percussions that made Ottmar Liebert a staple in late 90's new agey make-out music. Liebert played a custom flamenco guitar for most of the evening with a couple of transitions to a custom Keith Vizcarra strat-style electric for some very trippy, almost Pink Floyd sounding electric guitar solos. The fretless electric bass added a jazzy sound to the music. The two percussionists were scarily intense in their five minute "dueling drums" solos, though for a guitar guy, I must admit the interest was more academic than inspiring.
This was the near the end of their summer tour series, but there will be more gigs coming up in September.