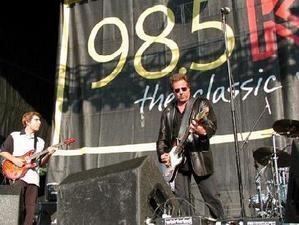 Greg Kihn Band kicked off the Santa Cruz Beach Boardwalk summer concert series with two sets on Friday night.  The band was in excellent form with Greg Kihn on vocals and rhythm guitar, his son Rye on lead, Dennis Murphy filling in on bass and Double D on drums.  The sound was tighter than usual, though I'm not sure if its from more rehearsing or less!
The set included classic GKB hits like "Hurt Myself", "Talk About It", "Remember", "Jeapordy" and "Breakup Song."  There were also a few cover songs including the Yardbirds' "Ain't Got You" and,  oddly enough, Green Day's "Boulevard of Broken Dreams."
Rye Kihn is the band's secret weapon giving the band an edgier, more modern sound.  He cut loose on the solo in the "Breakup Song" and completely won over the audience.  Rye learned guitar at the hands of GKB alum Joe Satriani and then studied at the Guitar Institute of Technology.  At some point, Rye's got to step out of the shadows though and develop his own material.  (Rye also plays in Big Fun.)
If you're in the area, head on down to the Santa Cruz Beach Boardwalk to check out some of the other Friday night concerts including Colin Hay (Men at Work), Eddie Money,  Family Stone Experience, Micky Dolenz (The Monkees), The Drifters and others.

Long-hair Swedish retro-modern rockers the Hellacopters, have released their latest album "Rock & Roll is Dead" in Europe this past week to great reviews among metal-pop heads everywhere. I'd never even heard of them until arriving in Stockholm a few days ago, but I saw posters everywhere and kept hearing their music so I finally broke down and bought three of their CDs while I was here. Hopefully the new album will be released in the US, but I doubt the R-Rated video of "Everything's on TV" will get airplay anytime soon. The CD has a several very catchy songs such as "Before the Fall" and "Murder on My Mind" and, unfortunately, a couple of throw-aways like "I'm in the Band."

Long-time fans may find the music has mellowed a bit, but I would say the music has progressed from its MC5 raw punk thrash inspiration to be a lot more fun.  Die-hard fans may find "Leave it Alone" to be a bit too mellow, but I found it to be a nice vintage Stones style R&B number from the "Some Girls" era.  So instead of just having raw energy the last couple of albums demonstrate a greater versatility, better production, and, lets face it, catchier melodies. There's still some great wailing guitar solos, but its now more accessible now. I'm not sure I'd label it as punk, more like 70's metal inspired (think post makeup KISS meets the Hives with better guitar playing) and you'll not be far wrong.

Check out their website for gigs in Europe, samples of the music, videos and more.  If you can't find the Hellacopters CDs in stock you can get the equally excellent "High Visibility" CD or invidividual songs from MSN Music or iTunes.

As luck would have it, the Fabulous Thunderbirds performed live at Akkurat in Stockholm last night.  It was an unannounced, unplublicized gig, on the way back from a festival in Finland, that provided 90 minutes of high octane Texas-style electric blues in a small local club.  The latest incarnation of the band features co-founder Kim Wilson on vocals and harmonica ripping through classic songs as well as new material from their latest album Painted On.  Wilson's vocals are in excellent shape and he did a rockin 12 minute harmonica solo that had everyone, Wilson included, sweating up a storm.

Recent additions to the band, including dualing guitarists Kirk Fletcher and Nick Curran, added a new energy not seen in recent years.  Kirk added a lot of soul with his screeching Jim Shur custom Strat-style custom guitar.  Nick Curran, the youngest of the group, delivered precise and focused guitar parts with a classic Stratocaster sound while barely breaking a sweat.   The highlight, for me was a dualing solo that had both players with their axes behind their necks playing in perfect harmony while practically grinding into each other.   Curran also provided lead vocals on several numbers including "Shoot me down."  Ever the gentlemen, the band let a couple of local Swedish bluesmen join them up on stage.

Akkurat was as unlikely a setting for this gig as any you could imagine.  It's a classic Stockholm landmark club famous for their cask conditioned ales, huge selection of imported beers and wide range of Whiskeys.  Akkurat has become a hangout for local musicians and last night the place was hopping with just about every famous name on the Swedish music scene.  There were several hundred people jammed into the club and the normally reserved Swedes got into the T-birds in a big way.

If you get a chance, catch the T-Birds live.  They're touring throughout the east coast and midwest with a few west coast gigs through the summer and fall.   Unfortunately, I doubt you'll find a venue as intimate as Akkurat, but you never know where they might show up unannounced.  Also, watch for news of a live album later this year. 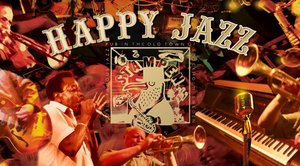 If you're ever in Stockholm with an afternoon or an evening to fill, check out Stampen, the famous Jazz and blues club in old town.  It's not a large club, but it has two stages, one upstairs and one in the basement.  On a recent Friday night I saw two bands: Jump4Joy, a five piece rock and swing band and upstairs Hot Pretzels a ten-piece (!) rockin' 60's R&B style band.  For a cover charge of 120 Kr (around $17) both bands captured the spirit and energy of early American rock 'n' roll and turned up the heat to sauna levels.  It's kind of interesting to see these Swedish bands play tribute to American roots music.  Think of it as the Scandinavian Commitments and you won't be far wrong.  Stampen also has great beers on tap starting at 49 Kr ($7) including local Abro, Beamish Irish Stout, Newcastle Brown and John Smith Ale.

Most Saturday afternoons at Stampen feature a live Blues Jam sessions led by American slide guitar virtuoso Brian Kramer.  It's a friendly hangout with a mix of regulars, wanna-be blues players and visiting Americans.  Kramer changes out the musicians every few songs, depending on who's waiting in the wings.  If you're able to fake your through a 12 bar blues or play a decent harmonica, just park yourself near the stage and wait for Kramer to give you the signal.  I saw some great guitar playing from regulars including what looked like a 50 year-old graying Swedish dentist  and a smokin' 17 year-old Asian kid playing a Fender Stratocaster.  Since this was the start of mid-summer, they also featured a complimentary barbecue with chicken wings and hot dogs.  As the afternoon wore on, the blues became hotter and  the music more electrified.

Stampen is easy to find.  It's about a 10 minute walk from Central Station to old town (Gamla Stan subway) or if you're not familiar with the city, just ask any cab driver.

GuitarPort is the entry-level guitar modelling hardware and software package from the guitar gods at Line6. These guys have figured out that instead of playing guitar, there are a lot people out there who just want to goof around playing classic Led Zep riffs. But they have to sound exactly right. So what they did is modelled the sounds of classic rock songs and made it easy to get the exact sound you want. Hook up to this pint-sized device via USB to your computer, plug in your guitar and get the magic tone of your favorite rock song all for around $100. GuitarPort offers a monthly subscription for $8 a month getting you the latest batch of songs, lessons and more. Line6 also has a full line of fancy-pants Variax modelling guitars that cram 25 classic guitar sounds from a 62 Stratocaster to a Les Paul Junior into one regular guitar. These guys truly have combined the power of computer hardware and software with the artistry of the guitar.

I saw Grammy-nominated Mississippi blues guitar player and vocalist Vasti ("vast-eye") Jackson and his band at the Blue Nile club in New Orleans. (Hint: get away from the cover bands of Bourbon Street and head towards the jazz and blues clubs of the French Quarter.)

Jackson is one rockin' soulful guitar player and he worked up a sweat on this steamy New Orleans evening with some rockin' reggae and blues vibes ranging from Bob Marley's "Stir it up" to a satiny smooth rendition of Sam Cook's "You send me" (with a little Marvin Gaye thrown in for good measure.) Jackson deftly supplied vocals and an amazingingly full guitar sound with speed, precision and subtlety. There's no doubt that as Jackson has made the move to front his own "Vast-Eye" band he has stepped full into the limelight that brings to front and center the energy and creative guitar playing that has marked his career. His sideman are excellent, including a powerful bass, subtle swirling keyboards and even keeled drumming, but, --make no mistake-- Jackson is the main attraction. He's got the presence and the command not only of his band but of the audience.

Jackson brought the full power of his Gibson Les Paul and a custom handmade Strat-style guitar power to give a vibrant clean sound through a Line 6 Flextone amp. Don't miss a chance to see Vasti Jackson live in New Orleans or in California later this summer. Check out this sample of "The Fix It Man" on CD Baby or buy the album "No Borders to the Blues".

Jackson is playing in and around New Orleans in June:

Later in the summer Vasti will be touring Northern California. Stay tuned for an upcoming interview with Vasti on his guitar technique, his equipment and why he loves the blues.

Ok, if you're not quite ready to spend the big bucks on a Pandora, you can still get portability with a Smokey Amp. These are the world's smallest guitar amplifiers offering 1/2 watt of power from a silicone-injected cigarette pack. No kidding! Designed by former Fender engineer Bruce Zinky, these have been described as sounding like a "wet fart." Provides a unique and bizarre distortion sound that can be used as a portable amp or as an effects pedal into a cabinet or headphones. Perfect for sounding like Joe Strummer from the Clash. Available online and in guitar shops for $30.